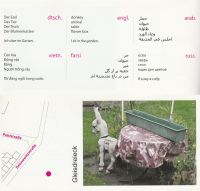 HERE IN TIERGARTEN SÜD
In autumn 2010 a home for asylum seekers opened in my neighborhood of Tiergarten Süd. Thanks to the well established local network the children could quickly be integrated into the school and recreational facilities. Commissioned by KIDZ e.V. photographer Angela Kröll and myself implemented a welcome project for the adults from Iran, Somalia, Afghanistan and other countries. We explored their new environment, they took pictures of interesting places. To improve their German skills we decided on four words and one short sentence to go with a picture and refugees from the home translated them into six languages. Those arriving today in the neighborhood still use the 24-page brochure we designed as a guide to their new environment and language.

STRONG MOTHERS IN BERLIN-MITTE
In 2009/2010 I managed this project with Josefine Rieger for KIDZ e.V. Our goal was to identify and analyze the public, private and social networks of support and confidence of mothers in the Heinrich-Heine and Karl-Marx-Allee neighborhoods.
During the first phase we interviewed experts, drew up a micro-study and created the interactive platform Stärken stärken. In 2010, we surveyed the target group of mothers on their needs and ideas in regard of reconciling work and family life. From their answers we developed a concept for projects empowering this target group.

KIEZFRÜHLUNG
With 2 times 12 street interventions in May / June of 2008 and 2009 we invited young and old passerbys to join in, be amazed and enjoy Potsdamer Straße as a space for entertainment and communication.
Participants happily let actors take briefly out of the Potsdamer Strasse routine, there were street dance, a flower planting workshop, bike coding, photo shoots, football table tournaments, magic tricks for children, singing and dancing in front of the local shops and much more. 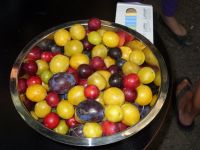 POTSTANDEM
The basic idea of PotsTandem was to join a trade and a media professional based in the neighborhood of Potsdamer Straße to collaborate in a short and spontaneous action. The tandems were drawn by the lot and then decided on activities such as a reading, a presentation, a photo session, a meal or or or. During a walk the tandems presented their findings at a location of their choice within the neighborhood. Great ideas and potentials came up during the three run-throughs of PotsTandem. They were fun and created long-term relationships between the participants.